What is restriction enzyme cloning?

Restriction enzyme cloning, or “restriction cloning” for short, makes use of DNA restriction enzymes to cut a vector and an insert at specific locations so that they can be easily joined together by the enzyme DNA ligase.

The History of Restriction Enzyme Cloning

“Cloning” as a general laboratory procedure involves making multiple copies of a DNA fragment to enable it to be more easily studied and manipulated.

Most commonly cloning is achieved by inserting one or more DNA fragments of interest, often referred to as “inserts”, into a circular self-replicating DNA called a plasmid vector. When the joined plasmid/insert is introduced into a bacterium the circular plasmid/insert replicates to create hundreds of identical “cloned” copies per cell.

Prior to the 1970s, scientists were not able to easily isolate and study individual genes from organisms. The first advance needed was the discovery of restriction enzymes and the DNA ligase enzyme. This key discovery coupled with the description of scientific protocols enabled scientists to use these tools to isolate individual genes from a genome.

The second major advance in the field was the development of plasmid cloning vectors which could be used to receive and replicate these isolated pieces of DNA. The development of these tools led to the publication of the first recombinant DNA molecules in 1972.

How do you select a suitable host for cloning?

Most cloning experiments are performed in a laboratory strain of the bacteria E. coli. Several strains have been developed over the years that emphasize the bacteria’s ability to be a host to a variety of vectors.

Typically this means that the methylation and restriction systems that are native to the bacteria are either deleted or mutated to become non-functional. This ensures that any foreign DNA is not modified after being transformed into the bacteria.

What are the characteristics of a vector system?

In addition to selecting a suitable host, you must also choose a suitable vector. Quality vectors typically have four characteristics: 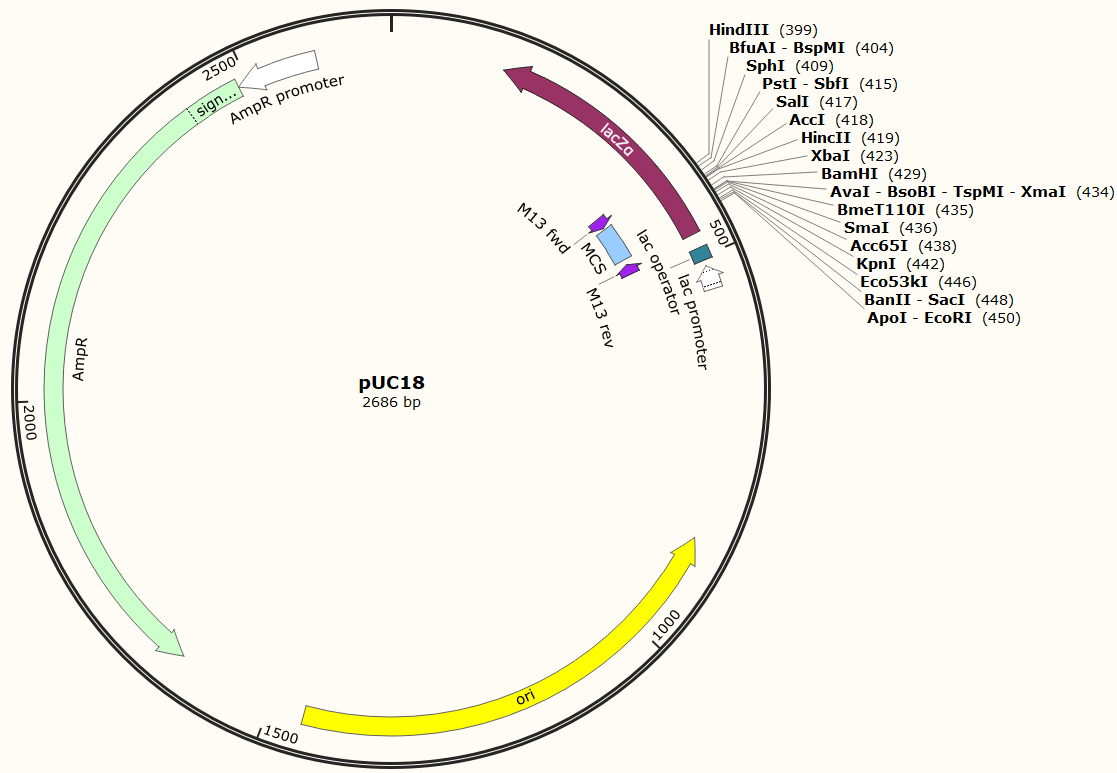 Nesting unique restriction sites within a β-galactosidase alpha-peptide coding sequence (called lacZ-alpha) enables you to differentiate between bacteria that contain a native vector vs bacteria that are harboring a recombinant vector.

This is typically mediated by placing the multiple cloning site within the lacZ-alpha coding sequence (CDS).

In the presence of the inducer chemical IPTG the lacZ-alpha gene is transcribed and translated into protein. The chemical X-gal, is cleaved by β-galactosidase to release a compound that turns the bacteria blue.

The presence of a foreign DNA in the multiple cloning site disrupts the β-galactosidase gene and renders the protein inactive. In this case, the bacterial colony remains white in color. This selection system is also known as blue/white color selection.

What are the Steps to Perform Restriction Cloning?

Step 1: Prepare your DNA for insertion

The first step requires you to properly prepare your DNA for insertion.

If cloning genomic DNA, the DNA may initially have to be isolated. If cloning messenger RNA, the RNA must first be reverse transcribed to create a first-strand cDNA of the RNA. The RNA-DNA hybrid must then be denatured and a primer annealed and extended by DNA polymerase to create a double-stranded cDNA.

PCR methods are widely used and have greatly reduced the amount of time and effort involved in these initial isolation steps. A further option is to synthesize the DNA of choice.

Rules for identification of suitable restriction enzymes for cloning

There are both single and dual restriction enzyme cloning strategies.

In single enzyme cloning, the vector and insert are cut with a single restriction enzyme. Single enzyme preparation is used for experiments where the orientation of the DNA fragment to be cloned (with respect to the vector) is not important. A typical example of this is the cloning of a genomic DNA library or a cDNA random cleavage library. The goal for single restriction digests is simply to isolate many different fragments of a given genomic DNA or cDNA.

Dual enzyme preparation is used for experiments when you want to control the orientation of the insert with respect to the vector. Examples include the directional cloning of a gene or a cDNA into a vector. Due to the widespread use of PCR, typically PCR primers are designed with the selected restriction enzymes built into the oligonucleotides’ sequence. The goal for dual restriction enzyme digests is to control the direction of fragments into vectors.

As noted above, the restriction enzymes that are used for cloning are typically located within the multiple cloning site of the vector. This enables you to make use of the blue/white selection marker if it exists within the vector.

You will typically check the combination of the overhangs generated by your planned restriction enzymes for compatibility with the cloning vector. This is crucial when you want to clone a cDNA sequence in-frame with the lacZ-alpha gene to create a fusion protein.

This step can involve analyzing multiple restriction enzyme combinations to evaluate which will generate an in-frame fusion product between the vector and the 5’ end of the cDNA. Usually a 3’ end restriction enzyme is chosen to ensure that the end of the cDNA protein and the remaining β-galactosidase gene’s protein coding sequence are out of frame and ideally one or more stop codons have been introduced.

See how to plan restriction cloning experiments in SnapGene for inserting either a single fragment or multiple fragments into your vector.

Step 3: Ligating the insert and vector together

In this step the vector and insert are mixed together and covalently joined in the presence of DNA ligase.

This step is highly dependent upon the presence of the restriction site overhangs to mediate the correct annealing of the vector and insert prior to the action of the DNA ligase.

It is critical to purify DNA prior to ligation

Purify both the vector and the insert prior to this step as the presence of competing DNA can result in low, inefficient, incorrect or no ligated product. Such sources of contamination can include self-linking of insert to self, vector to self, small molecular weight contaminating DNA from PCR reactions and many other sources. 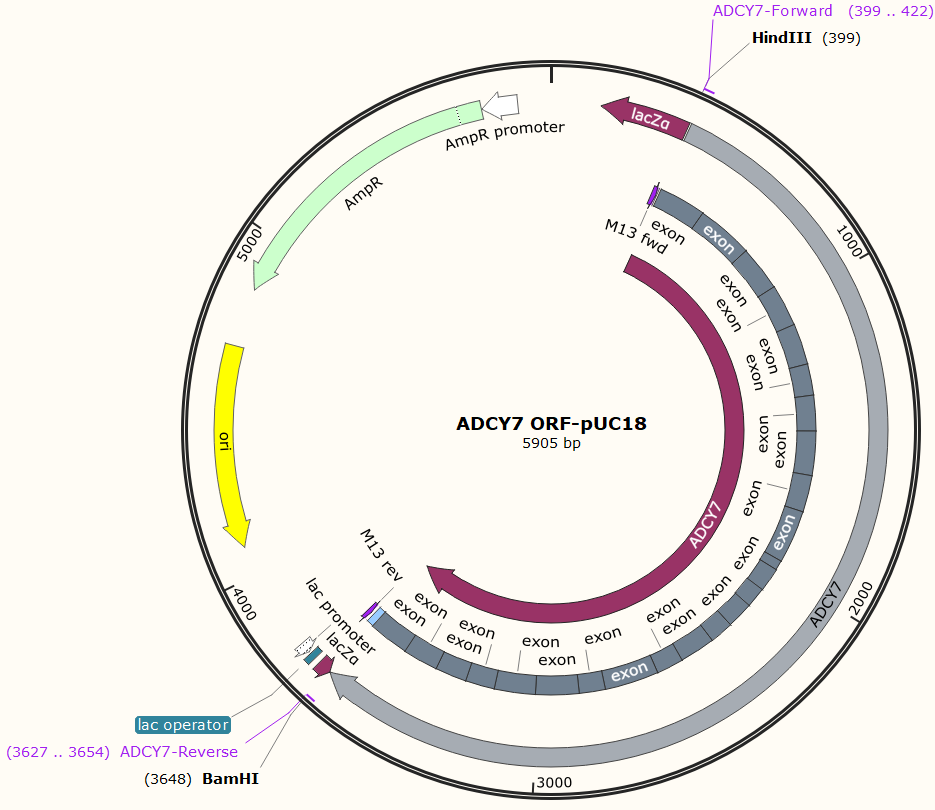 Following ligation, the DNA is introduced into bacterial hosts through a process termed transformation. Bacteria that are susceptible to transformation are termed competent.

Two main methods are followed in creating and then transforming competent cells with DNA.

In Heat Shock, competence is typically mediated by washing bacteria and then resuspending them in a solution of Calcium Chloride on ice. DNA is added to this suspension and the mixture is subjected to sudden heating for a brief period of time. During this process, calcium chloride enables the DNA to adhere to the otherwise negatively charged surface of the bacteria. The heat pulse creates a thermal imbalance within the cells that results in pores opening through which the DNA is able to enter.

The second method is electroporation. Here the bacterial cells are made competent by being washed and resuspended in water on ice. A dilute DNA solution in water is added to the cells. The cells are then shocked in a 10–20 kV/cm electrical field. In this case, the electrical field introduces holes in the cell membrane where the DNA can enter.

Selective media for colonies that have taken up plasmid

Following transformation, the cells are plated on selective media. Only cells that have taken up the vector will survive to grow and form colonies. Both IPTG and X-gal are typically present in the media resulting in the blue/white color selection system according to whether a foreign DNA insert is present or not.

What are the main strengths of restriction enzyme cloning of DNA sequences?

More than 70% of all cloning experiments use restriction enzyme cloning. There are many perceived advantages:

What are the main limitations of the restriction enzyme cloning method?

As popular has restriction enzyme cloning is, there are some disadvantages:

When should I use restriction enzyme cloning?

The following are example uses cases when you may want to use restriction enzyme cloning:

The following are practical tips to consider when performing a restriction enzyme/ligation cloning reaction: