An overview of Gibson Assembly, a technique to create exceptionally large molecular clones from PCR products

This technique is named for its creator Daniel Gibson, who first published the method in Nature Methods, 2009. The technique was presented to create exceptionally large molecular clones in vitro. Since its inception, Gibson assembly has proven to be a robust technique that, with slight modification, is suited for combining both long and short fragments.

Similar to other advanced cloning techniques,  Gibson assembly is based on assembling overlapping PCR products.

Following the trend developing in more recent technologies, multiple enzyme activities are designed to work together in vitro. In Gibson assembly, the active enzymes are T5 exonuclease, Phusion polymerase and Taq ligase. 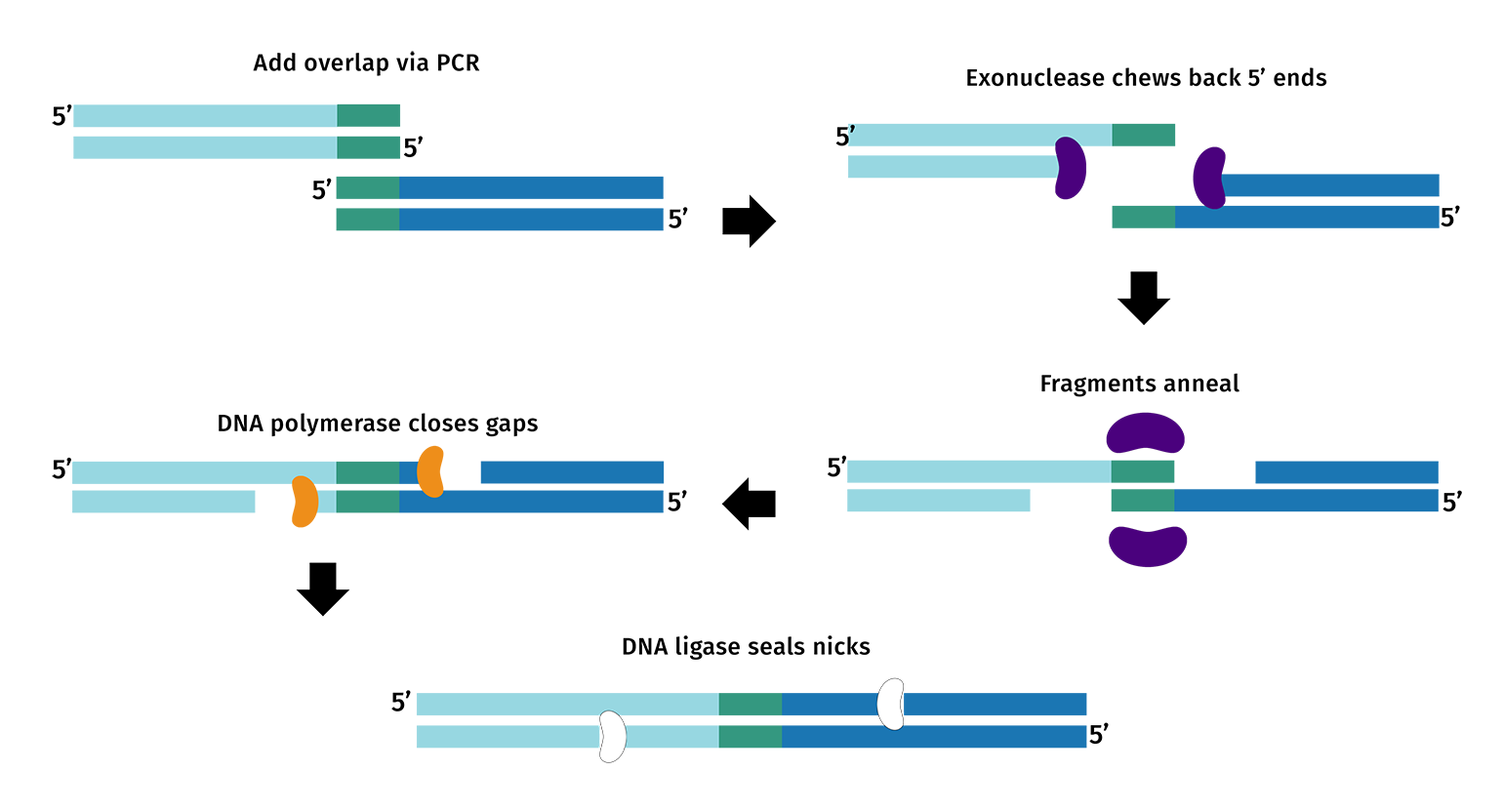 These enzymes work together to fuse overlapping DNA fragments.

Exonuclease chews back the 3’ end of double-stranded DNA to expose engineered overlaps. Polymerase begins filling in at the overhangs preventing excessive enzyme chewing. When stable compatible overhangs anneal, ligase completes the fusion of the DNA fragments. Once ligated, the DNA is protected from the exonuclease.

The reaction is designed to occur at 50°C, with all enzymes selected for their stability and activity at this temperature.

To perform Gibson assembly, you will need to prepare one or more inserts and your vector. Insert fragments are always prepared by PCR. You have the option to prepare your vector by linearizing your plasmid with restriction enzymes or by using Reverse PCR.

PCR primers need to be designed to amplify your fragment of interest and include 20 or more base pairs of homology to the vector or adjacent fragments in your cloned product. The length of the homologous ends depends on the number of fragments being assembled and their length (see below).

When designing your cloning project, you can imagine that your primers have two distinct components, the target-specific primer for amplification and the 5’ tail that will create the overlap between the vector or adjacent fragments.

The components that make up Gibson assembly primers.

The target-specific part of the primer should meet standard PCR primer criteria, including composition and melting temperature.

While standard Gibson assembly does not work with short single-stranded DNA inserts, the closely related technique HiFi Assembly does. This allows you to have short fragments of interest synthesized. These fragments are then easily introduced into your desired vector.

How to insert a synthetic ssDNA oligo for Gibson assembly

Vectors may be prepared for cloning using restriction enzyme digestion with one or more enzymes. Ideally, the linearized vector fragment should be gel purified to separate the linear vector from any remaining uncut vector, which would contribute to background colonies. This will also eliminate the residual fragment from the multi-cloning site, if two enzymes are used.

Linearized vectors may also be generated using Inverse PCR, where primers are selected that will amplify the backbone of your chosen cloning vector. After amplification, the PCR product should be cleaned with a PCR clean-up column and be treated with DpnI to eliminate residual uncut plasmid template.

There are multiple Gibson Assembly reagents on the market. They have been optimized by different manufacturers generally either for improving fidelity at fragment junctions or for the creation of large constructs with multiple inserts. Some of the products are summarized here.

Depending on your overall cloning strategy, you can add tails to just the insert fragment(s) or the vector. You can use one preparation of a purified vector with multiple inserts by adding homologous ends to the insert primers. This is particularly applicable when linearizing the vector with restriction enzymes. 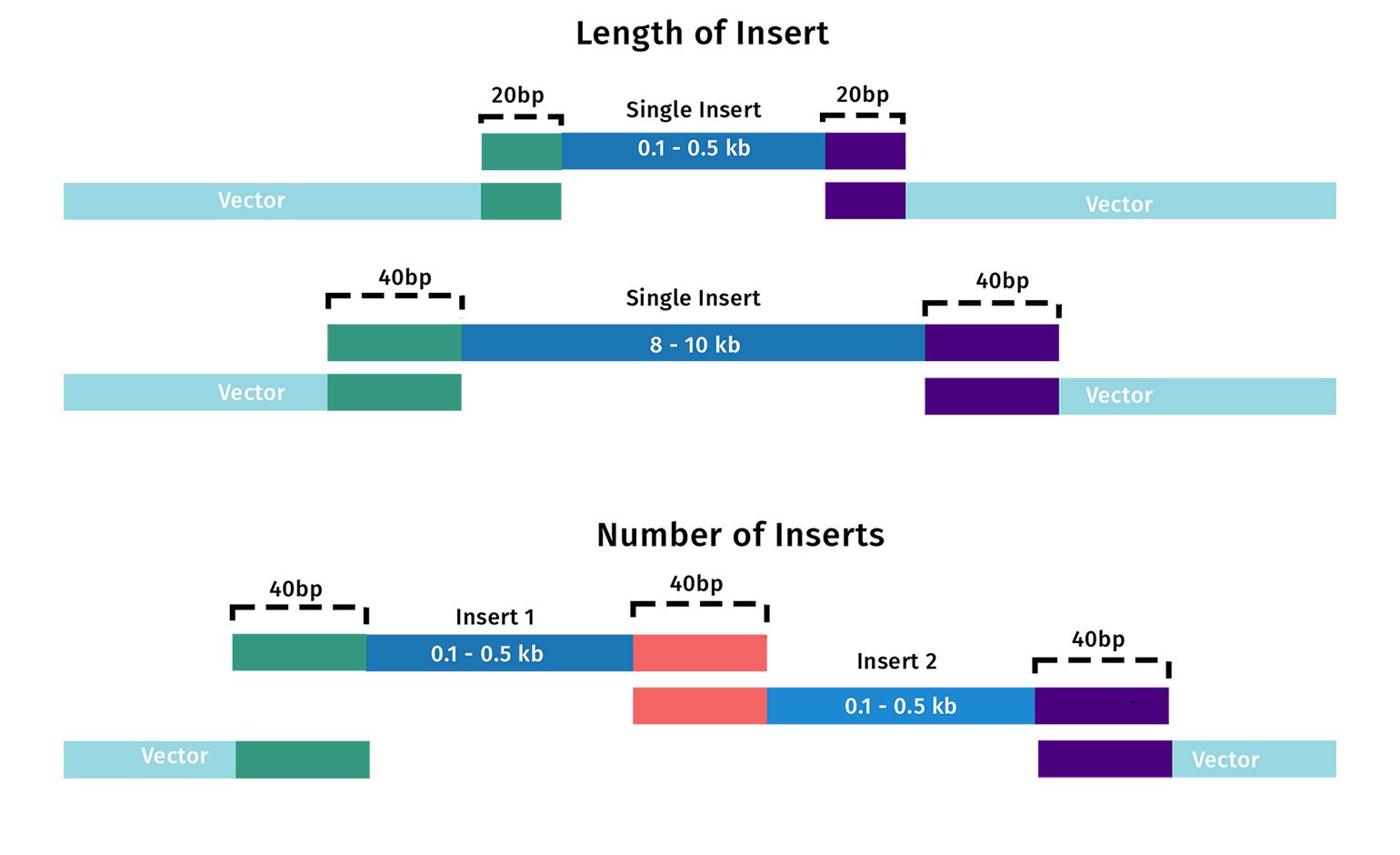 The length of the homologous tails depends on both the size of the inserts and the number of inserts being incorporated. There are a few general rules for primer design:

This chart adapted from CODEX cloning outlines how these variables should affect the length of the overlaps between your fragments. Consult specific manufacturers when planning your assembly reaction.

The SnapGene tools for Gibson Assembly and NEB HiFi Assembler allow you to customize the size of your homologous overlaps. You can indicate the specific length or specify the melting temperature. 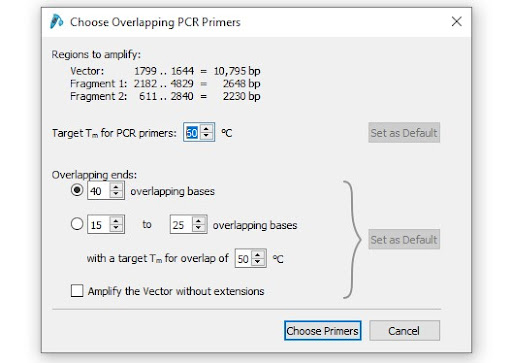 Suggested molar ratios of fragments to inserts are dependent on the size of the fragments and how many fragments are being assembled. Consult specific manufacturers for their guidelines.

Gibson assembly results in covalently sealed molecules in vitro. Simple assembly reactions are complete in 15 minutes. Reactions involving 4 or more fragments and/or exceptionally long fragments should be incubated for one hour or longer. To improve cloning efficiency, you can extend the reaction time to greater than one hour.

When using restriction enzymes to linearize your vector, uncut plasmid can result in background colonies. You can eliminate this by band purifying your cut vector.  Alternatively, you can use inverse PCR to prepare your linear vector. In this case, you can either band purify the resulting product or eliminate uncut template plasmid with the restriction enzyme DpnI.

As one of several synthetic biology assembly techniques, Gibson assembly is a sequence-independent and seamless cloning technique.

Gibson assembly has a few limitations.