Learn the steps involved in Golden Gate assembly and how to efficiently plan and simulate your experiment.

What is Golden Gate Assembly?

Golden Gate assembly, also known as Golden Gate cloning, is a one-pot, one-step cloning procedure created by Carola Engler and colleagues in 2008. The method takes advantage of Type IIS restriction enzymes (e.g. BsaI), which cleave DNA outside their recognition sequences. The result is an ordered assembly of a vector and one or more DNA fragments.

How Does Golden Gate Assembly Work?

Golden Gate assembly can be split into two distinct steps that occur within the same reaction: 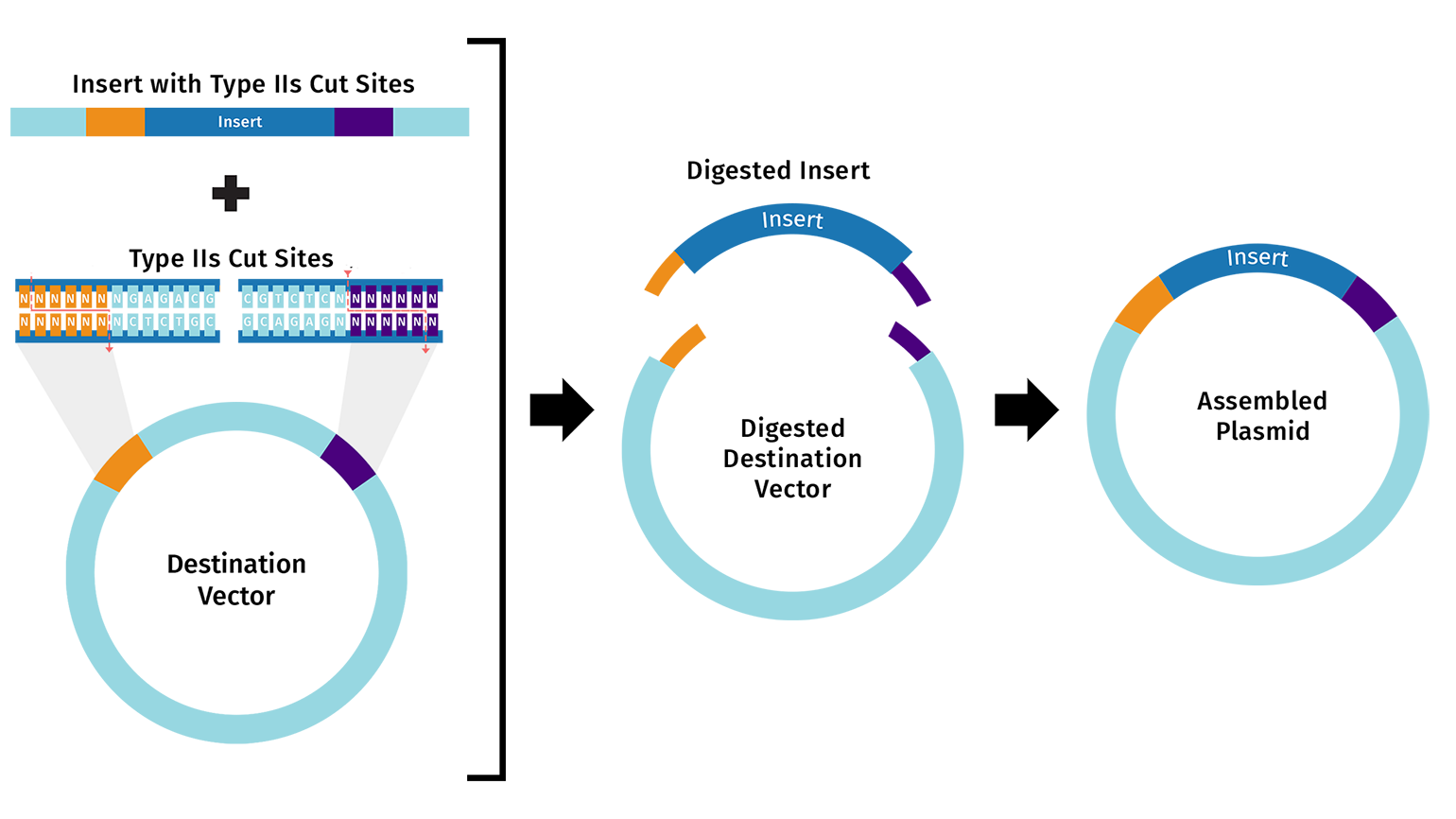 Once the destination vector and DNA insert(s) are digested, their complementary overhangs are joined together by DNA ligase to create an ordered assembly. The process is often denoted as “scarless” or “seamless” since undesired nucleotides are not added between the DNA fragments and the restriction sites are eliminated in the final construct.

Gateway Reactions are processed in a thermocycler. Assemblies of more than 3 fragments will cycle through reaction temperatures to achieve optimal cloning outcomes.

Alternatively, you can adapt your own vector to be Golden Gate ready. The vector should contain two Type IIS recognition sites (e.g. BsaI) that flank the desired insert region and a screening marker (e.g. lacZ).  The enzyme recognition sites must be oriented with an “outward” orientation so that after digestion the insert and the enzyme’s recognition sites are removed from the vector.

► Watch a video on site-directed mutagenesis 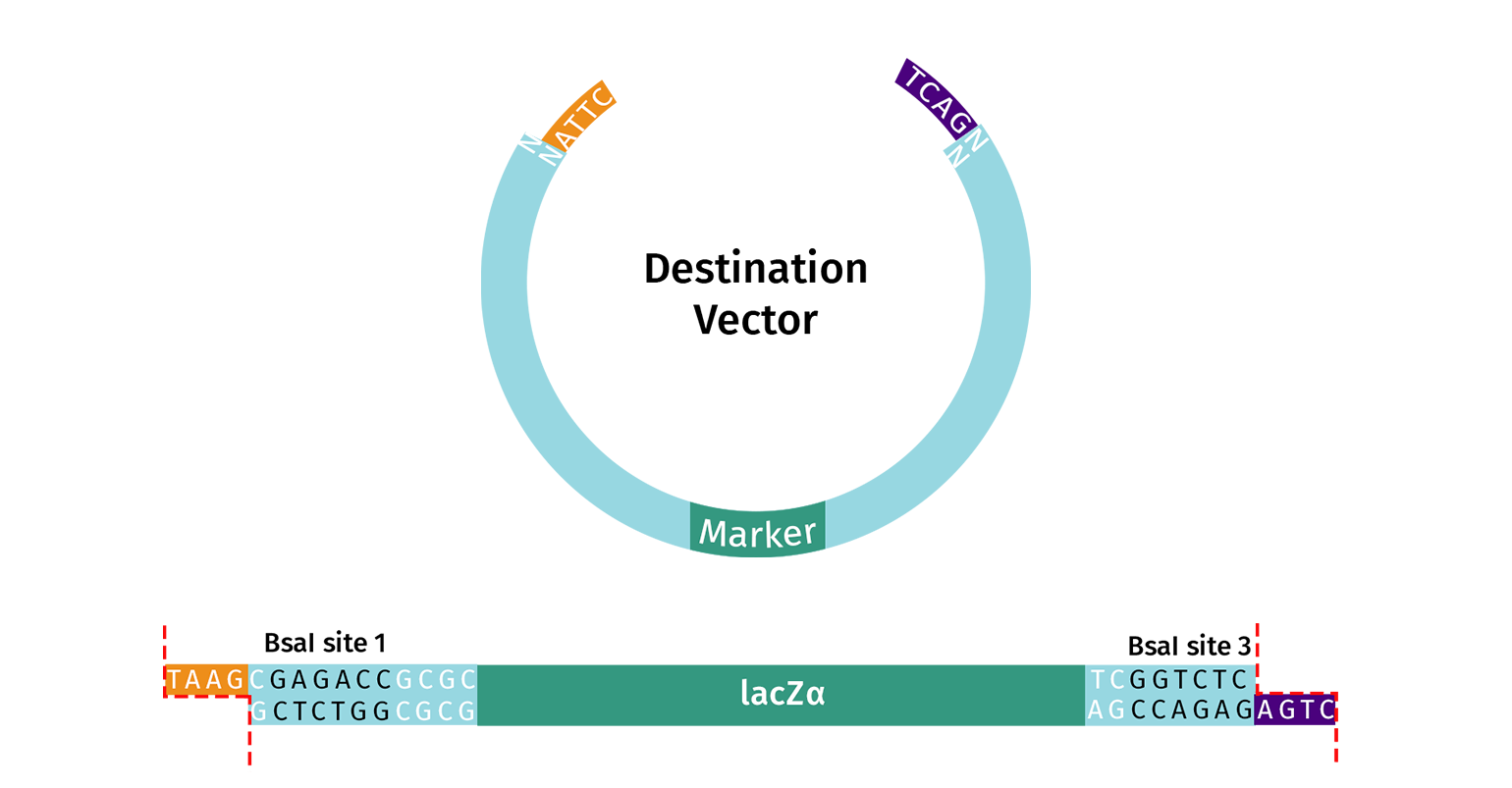 Any double-stranded piece of DNA can be used as the source of insert for Golden Gate Assembly, including both PCR product and plasmid DNA.

A fragment of interest is adapted for Golden Gate Assembly by the addition of Type IIS restriction sites. Recognition sites must be oriented with an “inward orientation” so that after cleavage the Type IIS recognition site is removed from your fragment.

For amplicon preparation, PCR primers are designed that contain flanking bases, the Type IIS recognition site and an overhang sequence. After amplification, the PCR product can either be cloned into a Golden Gate Destination vector or into a Golden Gate Entry Vector, such as pGGA, for sequence verification and re-use in multiple experiments.

As with the destination vector preparation, it’s also important that your DNA insert(s) do not contain extraneous Type IIS restriction sites. Unwanted cleavage sites can be removed with site-directed mutagenesis. If the Type IIS recognition site is in a coding sequence, the mutation(s) you introduce must be silent.

Thomas Cermak and colleagues first described the design and assembly of custom TALEN constructs in 2011. TALENs are fusions of transcription activator-like (TAL) effectors to a Type IIS restriction endonuclease (e.g. FokI), which is achieved through Golden Gate assembly. TAL effectors contain a customizable array of amino acid repeats that bind to desired regions of DNA. Once bound to DNA, the fused nuclease creates a targeted double-strand break. An alternative to CRISPR, TALENs are useful genome engineering tools that can be used to create gene knockouts or introduce specific DNA sequence modifications.

The MoClo system is a hierarchical approach introduced by Ernst Weber and colleagues that enables the creation of multigene constructs through a series of three Golden Gate assembly reactions.

MoClo kits generally contain three sets of cloning vectors (Level 0, 1, and 2) that allow users to recombine basic modules (e.g. promoters, coding sequences, and terminators) into transcription units, which are later joined to form multigene constructs. The MoClo system can be readily automated for applications such as gene stacking and metabolic engineering.

Double-check the orientation and order of your fragments

When performing Golden Gate assembly, it’s very important you take the time beforehand to plan the orientation and order of your DNA fragments.

It’s recommended to map the Type IIS restriction sites that you will be using and carefully annotate the fusion sequence associated with each site. When using primers to introduce Type IIS restriction sites to amplicons or pre-cloned plasmids, ensure the recognition sites face inwards (i.e. towards your DNA insert). As you process your cloning strategy, you will need to be sure that the selected fusion sites will ultimately assemble your fragments of interest in the correct order.